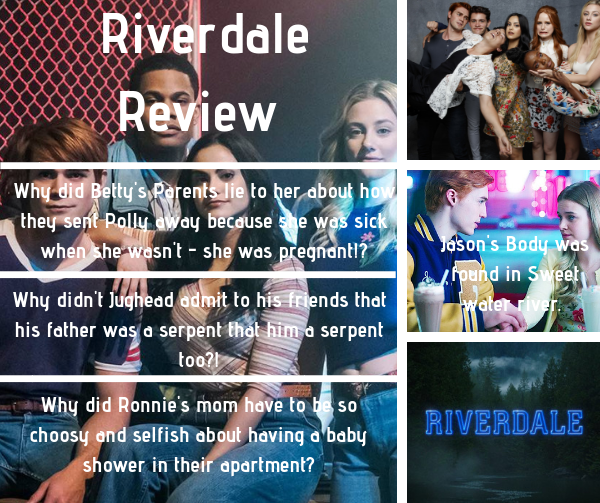 I think Riverdale is the best TV show on right now. The cast of characters includes Jughead, Archie, Veronica, Jason, Betty, and Cheryl, who you might recognize from the Archie comics of the 50s. This show reinvents them for a new audience.

So what’s the plot? Well, On July 4th the Blossom twins head down to Sweetwater River for their early morning boat ride. Cheryl Blossom accidentally drops her glove during the ride. When Jason leans down to reach for it, He trips over the boat and drowns. Cheryl also fell but swam to the shore in time but forgot to help Jason. Later that day the boy scouts were having an adventure. When they saw Cheryl without Jason and the wrecked boat, they immediately called the police. The Blossoms searched every deep end of Sweetwater river but never found Jason’s body. At school, they had a new student: Veronica Lodge. The latest generation of Lodge Women. Her mother became a criminal by paying money to the Serpents because her dad was in jail. The serpents are drug dealers and also construction workers with Archie’s Dad. Archie is a Football player that has hair just like Jason! Once on the football field, Archie was doing his rounds before his football game, Cheryl saw him and since he looked just like Jason, she ran to the girl’s locker room bursting into tears. Cheryl is the head of Riverdale Vixens (Cheerleaders). Veronica lodge ran after her to comfort her and find out why she ran. Betty Cooper (who is Polly cooper’s sister) admitted that she liked Archie. Archie was dating Veronica so had to say no to heartbroken Betty.

Riverdale is one of my favorite shows at the moment and has become one of the most discussed shows amongst young people. The women of Riverdale are the strongest and fiercest characters in the show.  Individually, the characters bring so much to the show but Archie, Jughead, Betty, and Veronica are unstoppable when united. Archie and Jughead are two partners in crime that people do not mind looking at. They have become inseparable when it comes to solving the mysteries of their town. We all have to admit that the Blossoms are the creepiest bunch in Riverdale for infinite reasons. The obnoxious that is the Cooper family is also endless entertainment and tears. How about that time when Alice Cooper threw a rock at Hal’s window? Although the show focuses on the drama and murder of the town, there are times when it is just about the lives of the teens. From the romance to the parties the teens of Riverdale do have time to just have fun.