Among Us: GAME REVIEW

All you need to know about the popular game Among Us 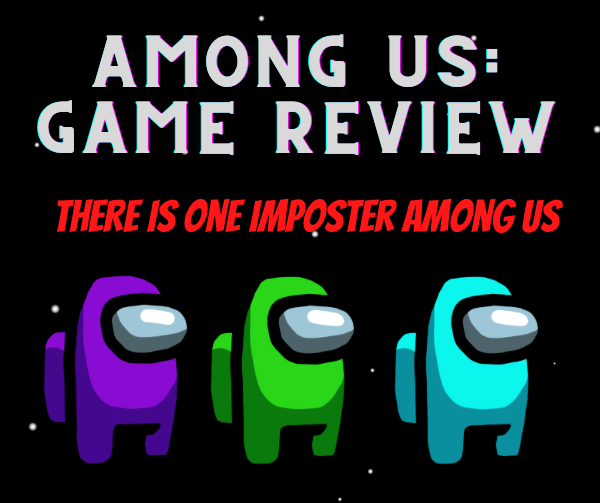 Among Us is a pandemic favorite. Why is the game so popular?

Among Us was actually released in June, 2018 but gained the majority of its popularity in August of 2020. Contributing to the popularity of this game is the crazy numbers of Among Us content on YouTube, TikTok, and Twitch. Once some gaming channels started streaming, the game blew up practically overnight. Another reason Among Us soared in popularity is that it’s not a difficult game to play. People from all different skill sets can come together and play this game. You don’t need a previous gaming history.

Among Us is very similar to Mafia. There is typically one imposter whose goal is to kill all the players from the spaceship. The other players or crewmates try and work together to find the imposter. Crewmates work on tasks in the spaceship while trying not to get killed by the imposter. You can play with a minimum of 4 players, but the more players there are the funner it is. There can be 10 players maximum.

Tasks are minigames that can entail anything from filling the fuel tank to connecting electrical wires. Crewmates can win the game by finishing all their tasks. Once a crewmate discovers a dead body, they can report the body. Once the body has been reported, the crewmates use the chat function to make guesses who the imposter is. Often, players will use the term ‘sus’ which means suspicious. If any of the crewmates are sus you can vote them out of the game. If enough people choose the same player, the player gets thrown out of the game and becomes a ghost.

What I like about Among Us is that if you get killed off, the game doesn’t end. You can still try and finish your tasks to declare victory over the imposter. Another huge advantage to Among Us is that the game can be played on mobile devices. That means that you could play almost anywhere.

Clare Brown (8) said, ” I like that Among Us is easy to play and that you don’t get bored too quickly. It’s also a great game to play with a lot of people, and it makes it a lot more challenging.”

In conclusion I think this is a very fun game to play with your friends even if you can’t hang out with them in person. You can host private rooms where only you and your friends play. They acquire a certain code that’s specific to your game. Another fun feature is that you can chat with the players in your game. The chat is primarily used to figure out the imposter, but you can also use it to socialize with other players. Among Us is a great game to play in quarantine when socializing isn’t as frequent anymore.