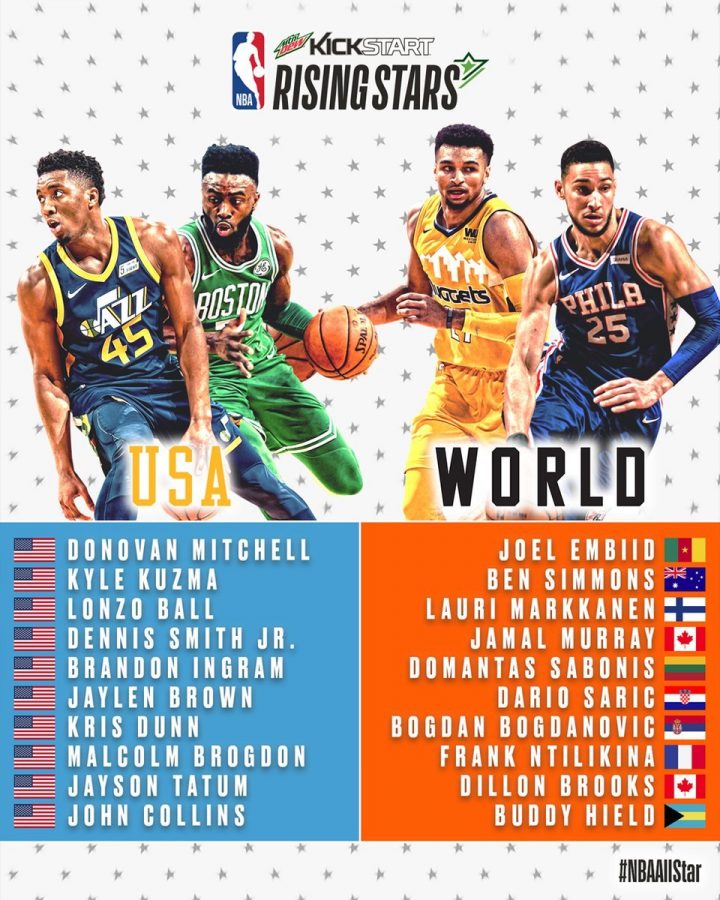 The format of the game and name was changed to the Rising Stars Challenge in 2012. The game format changed in 2015 to Team USA vs Team World, unlike regular NBA games, the game was divided into two twenty-minute halves, similar to college basketball. The participating players were chosen by voting among the league’s assistant coaches. Just like the All-Star game the team is composed of 5 starters and 5 reserves

Team World’s starting lineup included All-Star Joel Embiid, KIA Rookie of the Year candidate Ben Simmons, and 2017 Rising Stars MVP Jamal Murray. That bench was led by Sacramento Kings rookie Bogdan Bogdanovic, who scored 26 points (making seven of his 13 3-point attempts) and dished out six assists. Bogdanovic, a 25-year-old from Serbia, was named game MVP. The World took control with a 9-0 run near the end of the first quarter. After the USA closed to within four early in the second, a 16-5 World run proved to be the stretch that decided the game. Team World led by 19 points at the half, by 30 in the third quarter, and by as many as 39 in the fourth. It outscored Team USA 69-33 from beyond the arc (Three-pointers)

This was an overall summary of the NBA Rising Stars Challenge. It’s been the USA vs. the world for the last four years and Team World has a 3-1 edge over Team USA after the international squad rolled in the Mtn Dew Kickstart Rising Stars game on Friday, shooting 59 percent and winning all four quarters on its way to a 155-124 victory over the Americans.