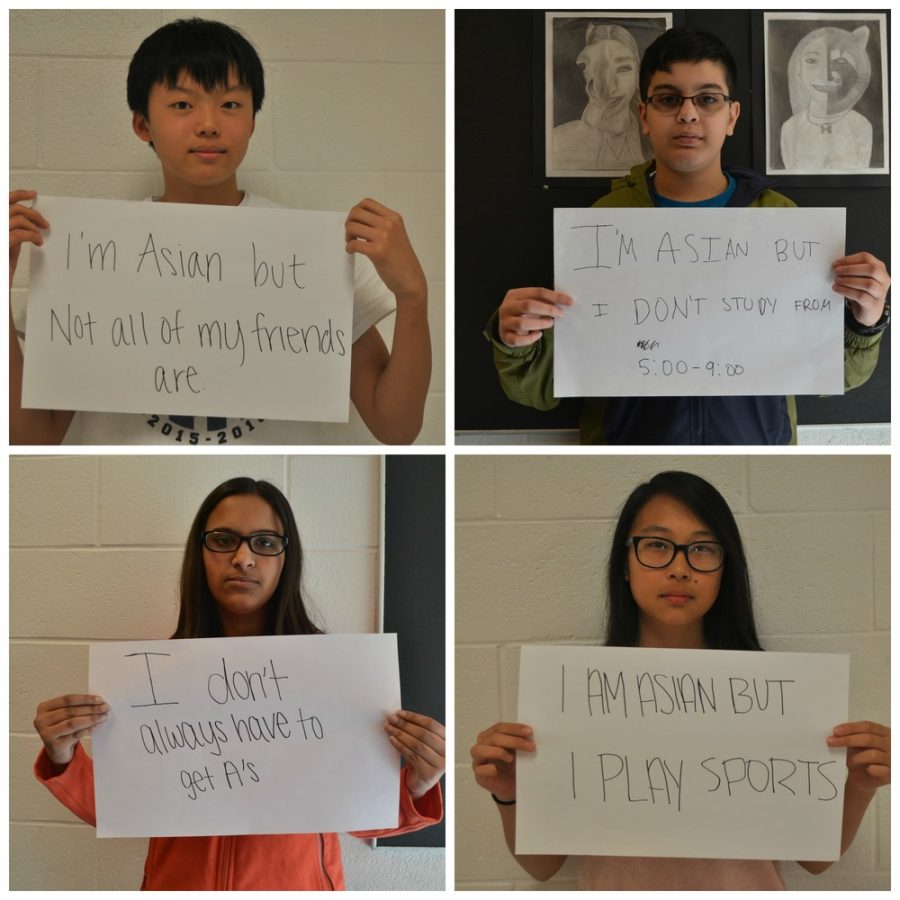 “You’re Asian, you must be good at math and suck at sports.”

“Oh! You’re Muslim, are you a terrorist?”

“So you’re white. Is it true that you guys are all dumb?”

A problem at our school that people don’t address as much as they should.

The instinct to make stereotypes is secretly hidden in all of us. It’s convenient and easy. This tendency to group people into categories and slap labels on them like they’re anything but a label happens almost unconsciously in our brains. Stereotyping is a shortcut to thinking about a person, and strips people of their own identity. The urge to stereotype should be fought back, but it seems some people are doing anything but that.

More than any other stereotypes, stereotyping Asians seems to be a common practice at Canyon Vista. Perhaps it is because school is the one place that focuses strongly on academics, and many Asian stereotypes tend to be on that particular matter. We’ve all heard the “all Asians are smart” stereotype, and school allows for comments like those to arise with the constant stream of tests and homework. All you have to do is peek inside a classroom and hear comments like, “well, you’re Asian–shouldn’t you be smart?” or, “can you even see me?, or the trademark, “did you Asian-fail, or did you actually fail?” Noticing any similarities? Apparently, Asians are closely tied with the generalization that “they’re all smart”. Grouping the largest continent into one label is a ridiculous matter in itself, just like all stereotypes are. Also, these stereotypes can be “positive” or “negative”, but in the end, plain wrong.

The problem is that sometimes people don’t realize how harmful stereotyping is. They can sometimes be told as a joke and people can just laugh it off, when you don’t notice the cruelness that lies underneath. The media does a great job of fueling the stereotypes too, with tons of depictions like “typical Asian nerd” circling the web. We’ve grown so accustomed to stereotypes that most people can conjure a list of qualities about a certain race/religion that is called. For example, when you hear “typical white girl”, what image pops up? Blonde, Starbucks, and Uggs©? They’re all from the media. What about when you hear “typical Asian kid”? Most likely what comes up is along the lines of a kid who wears glasses, is a math genius, National Science Bowl champion, and a tennis professional. The media has played a big role in shaping these stereotypes, and they do nothing but make them seem like the truth. &nbsp;

We asked a few people “Do you know any Asian stereotypes?”– and here are their responses.

“Asians always get 100’s. They always ask me, ‘Why didn’t you get a 100 on that math test?’ because apparently I’m supposed to be a math genius.” -Nikhil Lyles, 8th grader

“Of course I do. Asians are smart. They’re quiet, don’t know how to have fun, and are socially awkward. Asians are nerdy.” -Olivia Du, 8th grader

“All Asians are really smart. All Indians eat is curry. China and Japan and Korea are the same country– all the East-Asian countries are the same. And a lot of people think Indians and Pakistanis are the same thing too, they don’t realize they’re not. These stereotypes are just &nbsp;annoying– sometimes racist, usually racist. I get kind of angry at them too, especially like the ‘muslims are terrorist’ ones.” -Samia Arni, 8th grader

Next, we asked a few teachers,&nbsp;“What do you think about stereotypes?”

“I don’t believe in stereotyping. It makes people lose their individuality, and just groups them into one category–so they’re not really individuals.” -Carol Holeman, math teacher

“I wish I can show my students the future so that they can see how much more opportunity there is when you’re not putting yourselves into groups.” -Risa Piliere, ELA teacher

The next time you feel yourself grouping people into categories, realize how harmful it is and stop. Refrain from making stereotypical comments, whether you think they’re “good” stereotypes or “bad” ones because they’re all just as bad. Remind yourself to look at people for who they truly are at the core, rather than what the media says about that particular person because of their background.

And remember, labels are meant for objects–not people.