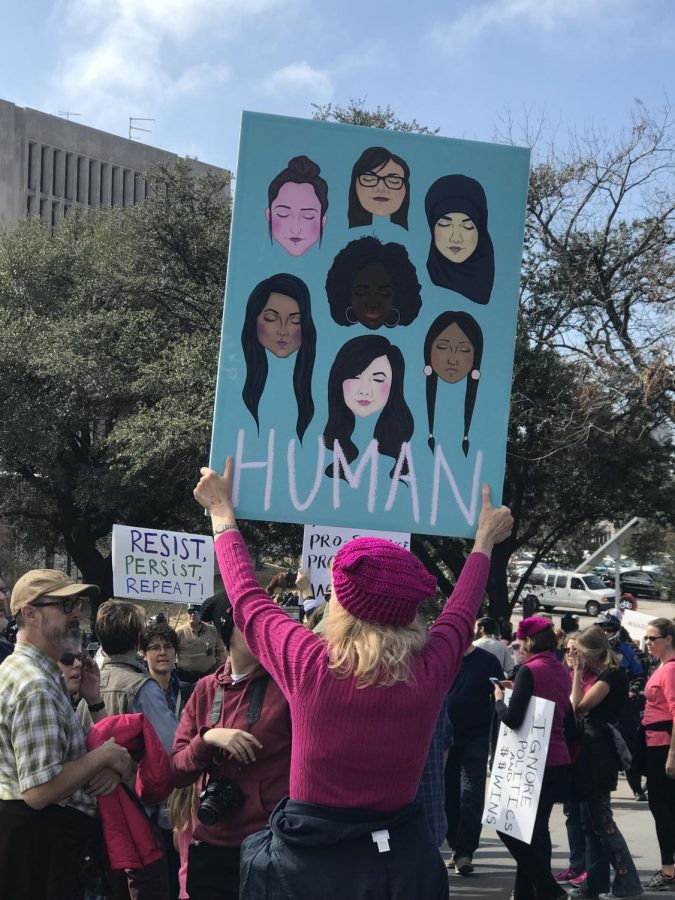 It was an early Saturday morning in the middle of January. She woke up, energy and excitement coursed through her veins. She had stayed up quite late the previous night in preparation for the oncoming Women’s March. Creating a sign with a powerful yet peaceful quote, she felt ready for the oncomings that were soon to arrive. She stared out her window, into the dew stained grass and hurried to eat her breakfast. Her anticipation was blooming and so with that, she hopped into her father’s old Toyota and she and her dad headed towards the heart of Downtown Austin. All the way towards Congress Avenue, she tapped her foot in a  state of expectancy. She stared ahead, her eyes fluttering with giddy.

As the girl and her father arrived at a parking garage near the allotted site, she could hear the buzz from a large group up ahead, the mass singing in harmony to the tune of the ‘ Star Spangled Banner’. It made the young adolescent feel a burgeoning tap of patriotism. As they climbed up the loop cascade of stairs, they were greeted with an incredulous site. The area was filled to the brim with protesters, all colorfully dressed, their arms reaching towards the sky, large signs curled around their fingers. As they merged and blended into the crowd, the girl felt a feeling of strength. There she was surrounded in with people peacefully in protest for the equality, civil rights, and freedom of speech. She felt part of something, something that was truly impactful and it made her swell at the thrill of it all.

At this time in America when political tensions ran high,  she felt reassured at the democracy of the people and the true expression that was part of the nation’s greatness. She was aware that not every nation was filled with this crucial societal force, that even in today’s modern era, many were oppressed, they had to shield their true beliefs from the watching eye of their country’s government. This was sad to her. But she felt the voice of the people was louder than that of the highly few, the small group of privileged whose voices didn’t resonate with such rigor.